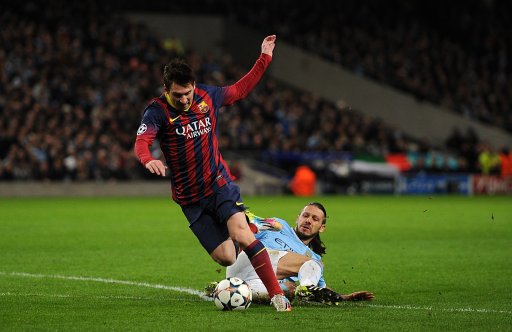 While to the rest of the world it looked like Manchester City were merely suffocated and swamped over the course of 90 minutes by a superior side (who went on to win at a canter), City boss Manuel Pellegrini has had the brass balls to come out and claim that his side lost last night’s Champions League last-16 tie due to flagrant referee favouritism.

Pellegrini has openly stated that Swedish referee Jonas Eriksson was, and we quote, “not impartial to both teams” and “didn’t have enough experience”, before adding:

“The referee decided the game. He was on Barcelona’s side from the beginning until the end.

“Before the penalty, which was outside the area, there was a foul on Jesus Navas. He didn’t control any of the game.

“I think it was not a good idea to put a referee from Sweden in charge of such an important match, and a referee who made an important mistake against Barcelona (failing to award AC Milan a penalty in the 2012 quarter-final) in a previous match. Today he arranged it.

“I think there is more important football in Europe than Sweden. This is a big game with two important teams and maybe in this type of game you need a referee with more experience.”

Wow. All seems extremely out of character for the normally reserved and non-confrontational Chilean.

To be quite honest, we can’t remember any particular decisions that were overly debatable or iffy. Barca were diving at the slightest contact and Victor Valdes got himself out of a few self-afflicted six-yard box scrapes by falling to the ground and yelling profusely, but City players were certainly indulging in ‘contact anticipation’ too – such is the Champions League these days.

Was the referee favouring Barca when he wrongly judged Cesc Fabregas to be offside here?

Yes, with the help of super slo-mo HD replays Andy Townsend was able to ascertain that Martin Demichelis made initial contact with Lionel Messi fractionally outside the area, but to the naked eye it certainly looked like a penalty.

What say you Pies fans? Are Pellegrini’s gripes credible and/or justifiable?