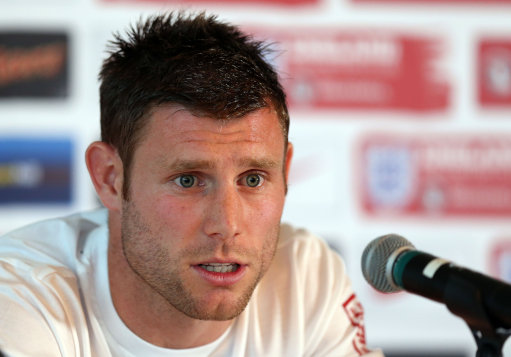 Though he admits it’s “good fun”, James Milner is currently on a mission to track down and eradicate the mischievous creators behind the @BoringMilner parody Twitter account.

The Boring Milner (which does exactly what is says on the tin) account currently has 249,000 followers, whereas Milner’s account for his eponymous charity foundation has a mere 15,000.

I’ve just taken my shoes off and realised I’ve been wearing one sock inside out all day. I told Gary Cahill & he said it was really funny.

Speaking at a pre-World Cup England press conference, Milner told the Telegraph he is on the hunt for whoever is responsible:

“It’s not doing badly, whoever it is. My foundation has 15,000 for the charity. It’s good fun. I’ve read a few of them and some of them are very funny.

My mates don’t mention it, no. I’d like the James Milner Foundation to have as many followers as that!”

Milner was then asked who he suspected was running the Boring Milner account, to which he replied:

“We went through this at [Man City], wondering who it was. There were a few tweets about Asda, so I was asking the masseurs where they shopped.

“I’ve never got close enough to actually accuse anyone of running it. I thought I had [with the masseurs], but I realised they didn’t have enough banter!”

I went to turn on the FA Cup final at 3pm but when I did I remembered it is a 5pm kick off. I’m still chuckling to myself about it now.