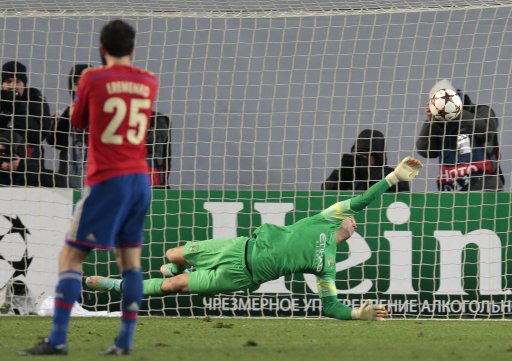 We’ll have a full report up later, but the long and short of it is that Manchester City were cheated out of their first win of the Champions League campaign after conceding a late penalty against CSKA Moscow this evening.

After going in two goals up at half-time in an empty stadium in Khimki, City – while hardly at their best, it must be said – had still managed to maintain a 2-1 lead as the game moved into the 86th minute.

It was at that point that CSKA striker Seydou Doumbia did the dirty on Aleksandar Kolarov and conned his side a late penalty with the kind of devious, cynical, scarcely-believable dive we’ve come to expect from the Champions League…

What referee Istvan Vad has seen there we’ll probably never know or be able to comprehend. Disgraceful.

Of course, CSKA’s Bedras Natcho converted the ill-gotten spot-kick to level things up at the death.