If you think you had a rough day yesterday then spare a thought for five-year-old QPR fan Chloe Power, who managed to get herself thwacked in the face during QPR’s 2-2 draw with Man City courtesy of a wayward shot from one Yaya Toure…

The good news is that Chloe escaped without any serious injuries, with Toure chasing her up after the game in order to check she was okay.

“Relieved to hear the girl my shot hit is ok.  I was very worried,” the City midfielder Tweeted.

“Just spoke to the lovely Chloe and her dad on the phone. So glad she is ok.”

QPR also confirmed that, by way of a joint apology, both they and City had bestowed Chloe with a shirt apiece – City’s personally signed by Yaya himself. 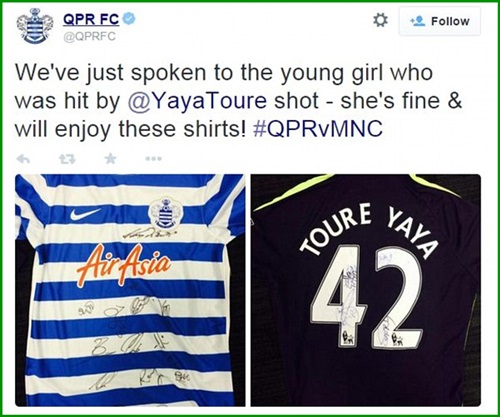