Manchester City continued their 100% start to the new season, courtesy of a 2-0 win at home to Watford on Saturday. 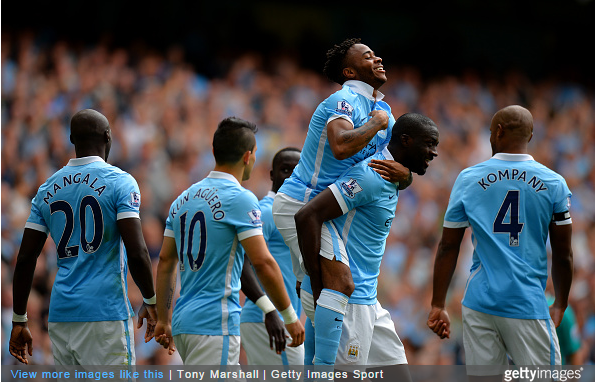 The Hornets came to the Etihad with a plan to stifle the Citizens talented attack and in the first-half it worked, with the visitors producing an organised defensive display.

Raheem Sterling had the hosts best chance of the first-period, only to see his effort saved by Heurelho Gomes.

At the break, Manuel Pellegrini brought on Samir Nasri for Jesus Navas as the Citizens looked to find the breakthrough. That change saw Sterling move into a more central attacking berth and on 47 minutes, the £49m man opened the scoring with a neat finish from close-range after a Bacary Sagna centre.

#MCFC 1-0 #watfordfc | GOAL Sterling scores his first! Will it be four wins in a row for the Citizens? Courtesy: NBC pic.twitter.com/MMWyEUcQGF

Nine minutes later, City were 2-0 up when midfielder Fernandinho blasted home from a David Silva pass.

Watford had little response to the hosts’ two goals, as they failed to direct a single shot on target in the whole game.

Yaya Touré mustered a few long range efforts as the half progressed but in the end, the Citizens were well worth the three points.

Pellegrini’s charges have yet to concede this season and have now won 10 league games in a row, their best-ever run of victories. As for Quique Flores and co., they’ll need to show a bit more going forward if they are survive in the top division.