West Ham superb away form continued on Saturday, with the Hammers’ halting Manchester City’s 100% start to the domestic season at the Etihad. 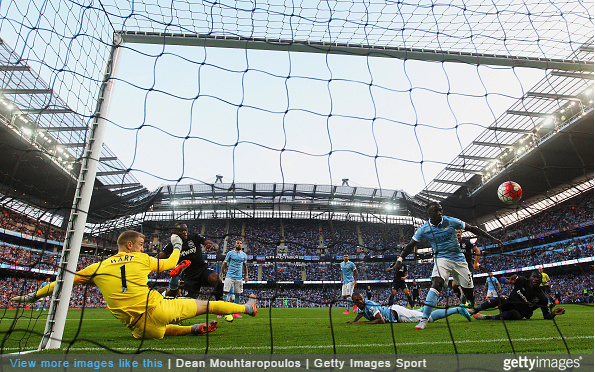 The omens weren’t good for the hosts when David Silva injured himself in the warm-up, with Jesus Navas taking his place in an 11 featuring Kevin De Bruyne making his first start for the club.

The visitors took the lead with just six minutes gone, when Chelsea loanee Victor Moses fired past Joe Hart from outside the box.

Sergio Aguero had a chance to level the scores, only to miss after beating Hammers’ ‘keeper Adrian to the ball.

While City pushed for the equaliser, it was West Ham who would score net. Diafra Sakho was the scorer for the visitors after City failed to deal with a corner.

Manuel Pellegrini’s charges did get themselves back into the game on the stroke of half-time, when De Bruyne fired past Adrian from outside the West Ham box.

After the break, the Citizens dominated, with Yaya Touré going close.

Nicolas Otamendi forced Adrian into a fine save late on, but ultimately the Hammers’ second-half rearguard proved successful, with Winston Reid in particular, outstanding in the heart of the visitors defence.