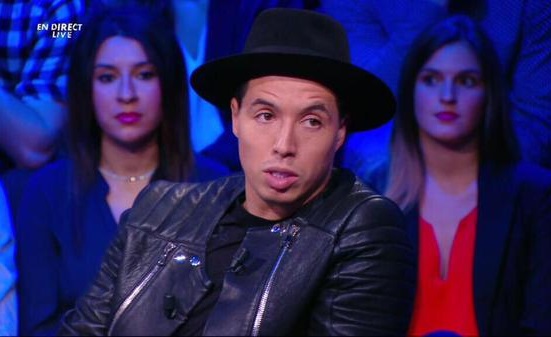 Looking like he stumbled through Justin Bieber’s car boot sale on the way to the studio, Samir Nasri appeared on French television last night to further incinerate his bridges with the French national team.

Nasri hasn’t played for France since he was left out of Didier Deschamps’ provisional 30-man World Cup squad in 2014, with Deschamps intimating that the midfielder had been snubbed due to attitude-related issues.

The Man City man duly retired from international football altogether in retaliation while his girlfriend, Anara Atanes, was all the more diplomatic in her response – simply Tweeting “F**k France and f**k Deschamps. What a sh*t manager!“.

Speaking on TF1 En Direct Live, Nasri was asked what it would take for his to pull on a Bleu jersey again, to which he replied:

Even if my father was the coach, I will not return. I’ve suffered with the selections – missing a World Cup destroys you a bit.

After 2012, I wanted to stop but my father told me I had to play the World Cup. I tried to be good. I had a great season with my club before the 2014 World Cup. I had very good stats.

It was not enough. No disrespect to anyone, [but] when I saw the list and some of those on it… I’m not perfect. I have my faults, but when you’re a great coach you manage the egos.

Nasri, 28, was also pressed on his plans for winding down his career in the future:

I do not see myself returning to Ligue 1. I love the Premier League. I like my life in England.

I see myself going to play in the MLS, to discover something other than France.

Doesn’t fancy a return to France, you say? We wonder why that could be.