A Raheem Sterling hat-trick helped Manchester City to an easy 5-1 mauling of top-tier new-boys Bournemouth at the Etihad. 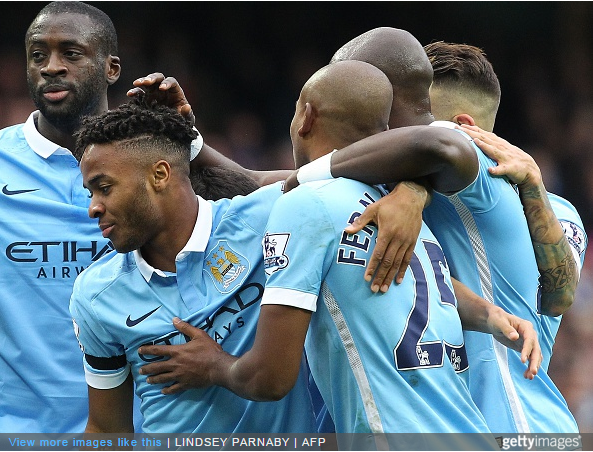 The game was only seven minutes old when Sterling netted from close-range.

Even without the injured Sergio Aguero, the Citizens tore the Cherries apart time and time again, and went 2-0 up just four minutes later, with Wilfried Bony scoring after Adam Federici (who replaced Artur Boruc in the warm-up) had spilled a cross.

However, Eddie Howe’s side did get themselves back into the game, with Glenn Murray firing home from outside the box.

Just before the half-hour mark, Sterling bagged his second of the game, with the attacker waltzing through the Bournemouth defence before calmly finishing after a superb pass from Kevin De Bruyne.

De Bruyne’s Vision: What a pass from De Bruyne!! A fantastic goal to watch. Sterling with great finish! #mcfc pic.twitter.com/xaVq7TVPke

The former Liverpool winger then bagged his hat-trick just before the break, lashing home after Jesus Navas’ close-range effort had been saved.

In the second-half, the visitors were unable to make any in-roads into the three-goal difference, with City in control and Kevin De Bruyne continuing to shine on the flanks.

At the death, Bony netted his second of the game as Manuel Pellegrini’s side ran out deserved 5-1 winners.

The win sees City stay one point clear of second-placed Arsenal while Bournemouth are now fourth from bottom.