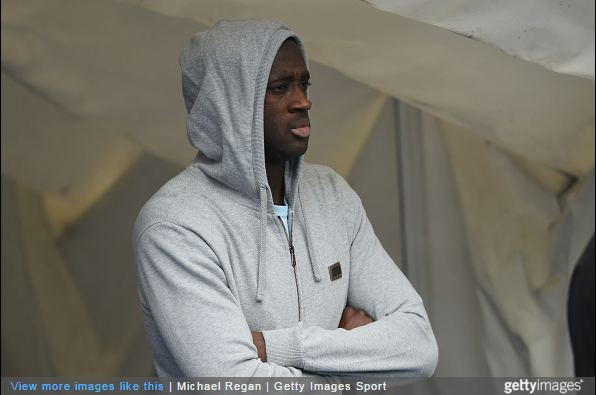 It’s been a couple of months since the last tantrum so Yaya Toure, regular as clockwork, has once again been bellyaching about his miserable lot in life.

While it doesn’t take an expert to identify the fact that Toure has been struggling for consistency so far this season, the Man City man is mortally upset that some horrible meanies out there have been pointing it out in public.

Speaking in a long interview with L’Equipe, Toure griped:

Everyone thinks I am happy: I have won titles, lots of money, but no, I am not happy.

When things are said positively, that interests me a lot. But here in England it is not the case. In these last weeks, the journalists have spoken about a new departure for me. But what new departure?

I have just finished a season with City where we came second in the league. I scored 12 goals despite the fact I had to leave the club to join my national team, who were playing in the African Nations Cup. I was out for nearly two months and I am reproached for not scoring as many goals as last season.

Last season I scored 26 goals, 20 in the Premier League, and nobody mentioned it.

When I arrived at City, I heard a lot of people say here that I was going to kill football. A lot of people, idiots I have to say, mocked me. And did you see what happened next?

We won nearly everything. I did it, we did it, because I was not all alone of course, but nobody picked up on it again. In fact, it is recognition that I do not have that hurts me.

When people attack you, you should not respond because, for the most part, they understand nothing.

Thankfully, my record and my statistics speak for me.

Turns out that diddums is equally unhappy on the international front too, as it would appear that some folks in the Ivory Coast still aren’t addressing Yaya as the sporting deity he truly is:

I love my country. If that was not the case, if I was spiteful, I would have said ‘I quit’.

But it is my country and even if I am the player who is the most insulted in this country, even if I am everybody’s laughing stock, I cannot abandon it.