League leaders Manchester City were well beaten at the Britannia Stadium in Saturday’s early game, with Stoke’s Alpine duo of Xherdan Shaqiri and Marko Arnautovic combining for both the host’s goals. 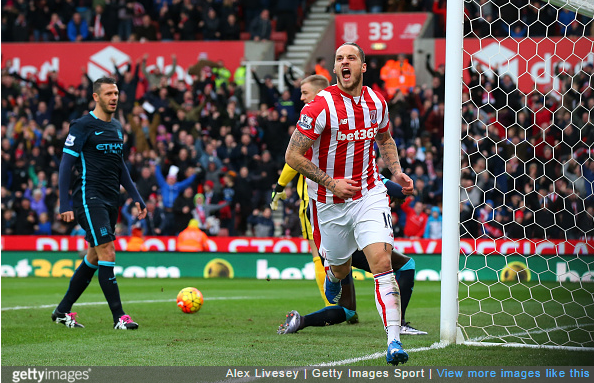 Shaqiri superbly set up Arnautovic for the first goal after just seven minutes, with the Swiss winger powering his way to the byline before crossing for his Austrian team-mate. Kevin De Bruyne then missed a good chance before the same duo combined again, with Arnautovic bagging his second of the game. Indeed, the former Inter Milan midfielder almost made it a hat-trick, only to fire against the post when one-on-one with Joe Hart.

After the break, the visitors continued to look sloppy, with Shaqiri missing an open goal after getting his feet in a muddle. Indeed, the Potters continued to impress while City looked oddly devoid of ideas. Their hopes of getting anything out of the game were further dashed when Fernandinho was forced off with a hamstring injury after all three subs had already been used, leaving the Manuel Pellegrini’s side to play the final 15 minutes with 10 men. Unsurprisingly, the game would end in a well-deserved win for the Potters.

Stoke go ninth while City look set to be knocked off the top by the end of the day.