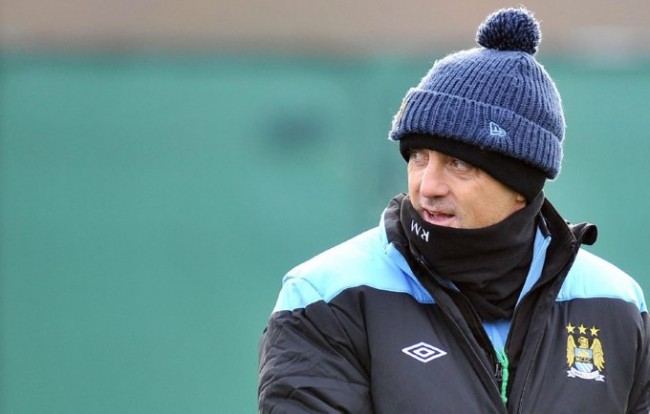 Bobby Two Hats, in all his bobbled glory

One look at Roberto Mancini’s standard winter Man City training garb is enough to tell you that he is a man who does not like the cold. Not one bit.

Indeed, it appears that the Italian went to great lengths to stave off the chill Mancunian climate during his time in the north west, including having a little chap pre-warm his clothes for him while he was out on the training pitch.

Tacked onto the bottom of Daniel Taylor’s Guardian column on Chelsea’s gamble with Antonio Conte are a few choice morsels pertaining to Mancini and his strange, slightly diva-ish behaviour while at the City helm.

First up is an intriguing exposé of Mancini’s personal interpretation of the ‘hairdryer treatment’:

On cold days Mancini would signal for one of his entourage, a genial Italian by the name of Jose, to go into the dressing room a few minutes before training had finished.

Jose would take a hairdryer and warm up Mancini’s jumper so it was just the right temperature when the manager came in.

And warming up jumpers was just one aspect of Jose’s many-splendoured job remit, it would seem:

Mancini certainly had some unusual demands if you consider that he turned a disabled toilet into his own personal bidet and made the devoted Jose drive 20 yards behind him on the days when he decided to cycle home from the training ground.

Mancini liked the fresh air of the countryside, but if he became tired he would simply hop off and get a lift with Jose.

Who is this mysterious Jose character and where do we get one?

In all honesty, we’re finding it hard to picture anybody other than Waylon Smithers here.