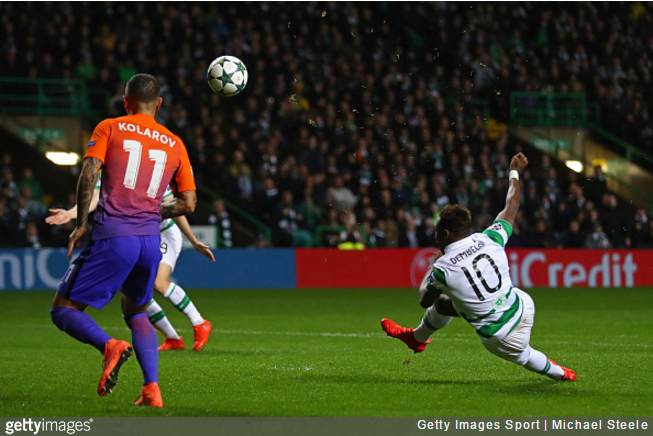 Moussa Dembele scored twice as Celtic held Man City in a rollicking 3-3 draw in the Champions League, though the 20-year-old striker’s second goal of the night was certainly more impressive than his first – at least from a technical standpoint.

Having put the Bhoys ahead in the third minute by deflecting Erik Sviatchenko’s diving header in from close range with his chest, Dembele edged the home side ahead again just three minutes into the second half with an inspired piece of off-the-cuff athleticism.

With impressive young left-back Kieran Tierney slinging a ball into the middle, Dembele capitalised on the space afforded to him by an Aleksandar Kolarov error and promptly sent the ball over his own shoulder and past the dumbfounded Claudio Bravo to make it 3-2 to the SPL side…

Expertly done. No wonder he’s been such an instant hit at Celtic Park.

City went on to grab a 55th-minute equaliser through Nolito to put the cap on a manic, relentlessly entertaining ding-dong that eventually earned Celtic their first point of the campaign.