Manchester City’s winless run was extended to five games on Sunday, with Pep Guardiola’s side held to a 1-1 draw by Southampton at the Etihad – the first time Pep has gone without a win in five consecutive games since March of 2009.

Individual errors blighted the Citizens in their midweek Champions League drubbing by Barcelona and similarly it was a major error from centre-half John Stones which handed Saints the first goal of Sunday’s game. 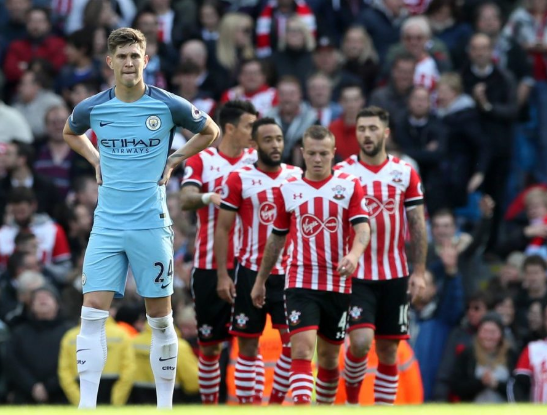 Stones himself is not stranger to errors at the back, despite his reputation as a technically adept defender, and he was at it again just before the half-hour mark against Southampton.

Receiving the ball on the right side of City’s defence, Stones was under little pressure when he played a horror pass in behind in behind Vincent Kompany, leaving the alert Nathan Redmond to round Claudio Bravo and fire home…

What a pass from John Stones on the edge of his own penalty area!!! 😣😣😂😂 #MCFC pic.twitter.com/FuRE0fjvuh

Stones seemed unaware that his defensive partner Kompany had stepped up before making the pass, but while a communication breakdown between the two players was definitely part of the problem, it was the ultimately England man’s mistake.

City did get themselves back into the game after the break via sub Kelechi Iheanacho. However, Southampton hung on to register a previous away point.

Despite the disappointing draw, Guardiola and co. return to the top of the Premier League, ahead of Arsenal and Liverpool courtesy of a superior goal difference.

That said, with no win in almost a month, City are looking far from the side all-conquering side that came roaring so dauntingly out of the blocks at the start of the campaign.