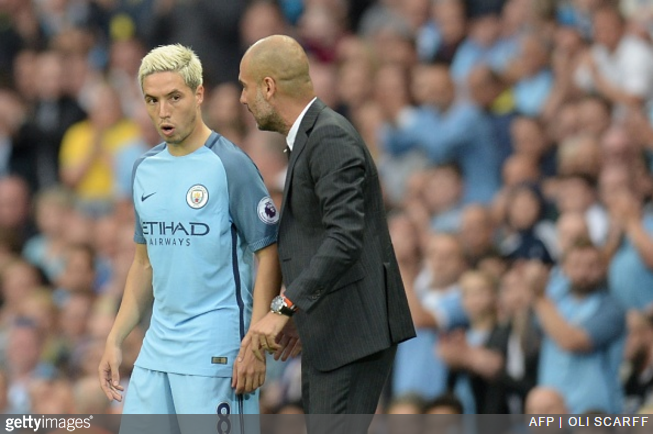 Instantly falling foul of Pep Guardiola’s anti-chunk mantra, Samir Nasri soon found himself being loaned out to Sevilla for the season when the Spanish coach took over in the summer.

Having since shed his excess timber (amassed while recovering from a long-term injury last year), Nasri has since gone on to impress at his new club, scoring three goals in 10 appearances in all competitions for the Spanish side to date.

Despite being farmed out in slightly acrimonious circumstances, Nasri insists that he maintains a decent accord with Guardiola.

Indeed, the 29-year-old used a television interview with L’Equipe to discuss the nature of his relationship with the fastidious City boss:

When I returned from holiday having had a year out with injury problems and personal life problems, I was a little out of shape.

Not as much as what was said but a few, maybe, four kilos overweight. For Guardiola, over 2.5 kilos and you do not you train with the group.

Guardiola told me that I was a mess, he told me several times and even kicked me in the butt, literally.

He told me with your qualities you should not be at Manchester City, you should be at Barcelona.

We had some discussions, he wanted me to stay and play for him. I told him no, because he couldn’t assure me a first team place and I wanted to play.

He told me he thought I was making a mistake.

Later in the interview, the French midfielder also revealed one of the more… shall we say ‘intimate’ intricacies of Guardiola’s regime:

There is the ‘midnight rule’. For him, his players’ sexual activity must take place before midnight in order to get a good night sleep – even if they are free the next day.

He [Guardiola] said that he placed this rule on Lionel Messi and his muscles have improved since.

Messi Sex Curfew. Hell of a name for a punk band, that.