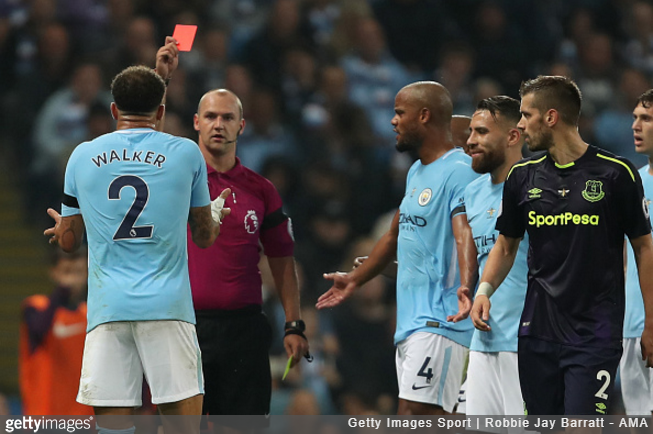 Man City tied 1-1 with Everton in the first Monday night fixture of the 2017/18 campaign, though once again it was iffy officiating that drew the most ire from concerned on-lookers.

Wayne Rooney had already steered the visitors ahead with the 200th goal of his Premier League career (more on that shortly) before City were relieved of a man just a few minutes before half-time when Kyle Walker earned one of the softest dismissals you’re ever likely to witness.

Already booked just one minute and 57 seconds earlier for a semi-foul on Leighton Baines, Walker was essentially shown a second yellow card for aggressively looking over his shoulder at Dominic Calvert-Lewin…

Referee Bobby Madley decided that Walker had thrown an elbow/shoulder at Calvert-Lewin, and sent-him off for violent conduct – the right-back’s first ever red card on his 200th Premier League appearance.

Madley then evened things up in the last few minutes of the second half when he apportioned a second yellow to Everton midfielder Morgan Schneiderlin for what seemed to be a stout, but perfectly decent challenge on Sergio Aguero…

Yes, Schneiderlin’s trailing leg skirts Aguero’s standing leg, but only after the interception had been made clearly. That’s the very nature of a sliding tackle.

Of course, it’s the latter’s reaction – collapsing, screaming to the turf – that influenced the call. Aguero was touched, but he still dived. The two aren’t mutually exclusive.

We’ve seen Schneiderlin’s ‘lunge’ derided as dangerous play, but if you can’t tackle like that anymore then we really don’t know what defensive players are supposed to do  – bar jink in and nick balls off forwards’ toes without causing anybody any discomfort.

Bloody wimps, the lot of ’em.