It’s 2018 and Man City are currently in the midst of launching an exciting new tech enterprise that they hope will revolutionise the relationship with their fan base and the club.

The Fantom smart band is a touchscreen widget worn on the wrist (think ‘pager on a sky blue silicon strap’) that will ply the wearer with “24/7 breaking news” about City, as well as live match stats and various polls and quizzes – all for the entirely reasonable price of just £79.99.

In the accompanying promo video, one middle-aged fan honestly – and somewhat depressingly – confesses with voice a-quivering that it’s the “best thing he’s seen from Manchester City” in the 62 years he’s followed the club.

Which, of course, is complete and utter tosh.

This is because the best thing that City ever did in terms of fan-interaction came a mere 50 years into said fan’s lifelong support, specifically in January of 2006.

We are of course talking about the time Manchester City Football Club attempted to gee up their flock heading into the local derby against rivals Manchester United by altering the colour of the tomato ketchup they served in their stadium concourse restaurant. 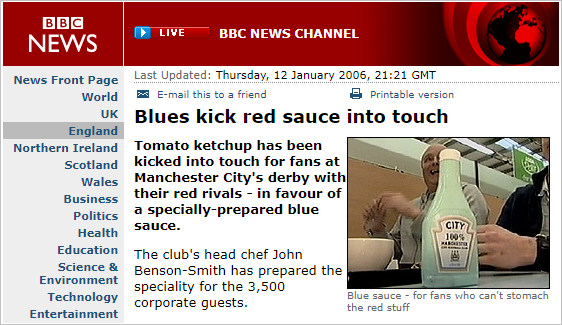 Several days before the big game at Eastlands, City’s resident chef John Benson-Smith proudly announced the fruition of a scheme he’d been tinkering away on for weeks: blue ketchup.

It’s all natural, but its got quite a kick to it.  At the end of the day, to use a well worn football expression, our blue sauce is just a bit of fun.

But our guests take their football as seriously as we take our food preparation and presentation and I am sure that the blue sauce will come out on top.

The condiment-based innovation was inspired by comments the chef had received from diners the previous season, wherein requests were made for a derby day menu without anything red on it.

Chef Benson-Smith was bang on with his prediction too, as City duly registered a 3-1 win over United thanks to goals from Trevor Sinclair, Darius Vassell and Robbie Fowler.

It was a simpler time, a better time. None of your billion-pound City Football Groups and £80 princess bracelets, just Albert Riera decking Gary Neville while fans gobbled appalling, off-colour chips.

Indeed, if you’re wondering whether the blue goop actually looked as disgusting as it sounds, then we can confirm that yes – yes, it most certainly did… 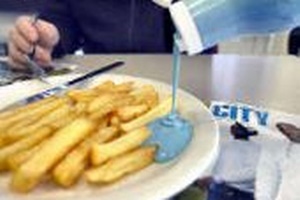