Raheem Sterling has wrote a rather lovely letter to a young fan of his who is currently going through a tough time as a victim of racial abuse.

The Man City forward, himself no stranger to such mindless vitriol, took the time to reply to Ethan after being contacted by the youngster’s grandmother. 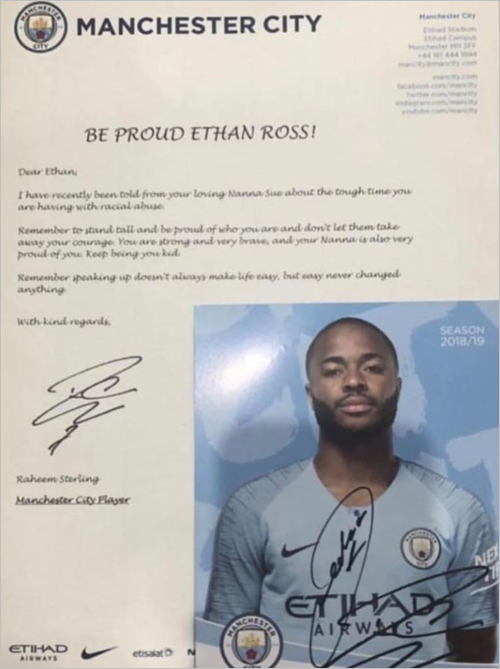 You can’t argue that Sterling doesn’t practice what he preaches either, having simply stood and chuckled at the abuse he received from those weird, fuming, pink-faced prats at Stamford Bridge last month…

The message above reads thus:

I have recently been told by your loving Nanna Sue about the tough time you are having with racial abuse.

Remember to stand tall and be proud of who you are and don’t let them take away your courage. You are strong and very brave, and your Nanna is also very proud of you. Keep being you, kid.

Y’know, we’re beginning to suspect that Sterling isn’t quite the rampaging, swivel-eyed, world-eating hell-hound the tabloid press have painted him as over the years.

In fact, we’re coming to the conclusion that he might actually be a bit of a hero.