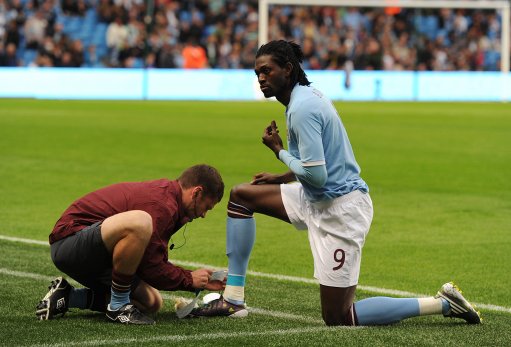 By process of elimination, the AP have deduced that Manchester City will be without both Emmanuel Adebayor and Joleon Lescott for their opening Europa League game with Red Bull Salzburg tomorrow as neither player was present at Manchester Airport this morning as City’s 20-man squad departed for Austria.

Adebayor is still suffering from the dead leg that forced him to miss City’s draw with Blackburn last weekend and, as a result of his omission, manager Roberto Mancini is left with just two recognised strikers at his disposal, namely Carlos Tevez and Jo.

Lescott has been replaced in the squad by Wayne Bridge who is set to make his return to the fold after suffering an ankle injury on the club’s pre-season tour of America.

Out-of-favour ‘keeper Shay Given also looks likely to miss out on a starting berth, with Mancini vowing to continue to select the in-form Joe Hart (his cock-up against Blackburn excepted) betwixt the sticks.

However, the Italian coach insisted that he is not prepared to allow Given to become a forgotten man at Eastlands;

“It is a difficult decision for me because Shay is a strong goalkeeper like Joe, but at this moment this is my choice. We are involved in four competitions and I’m sure Shay will play in Europe at some point but I will continue to play Joe on Thursday.”