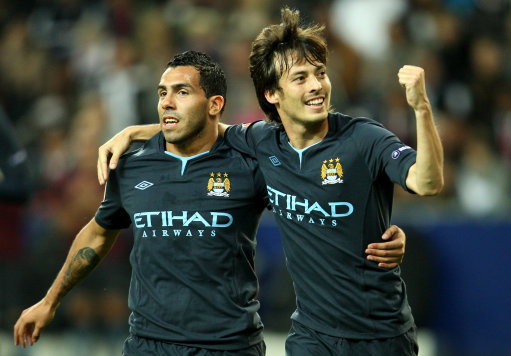 Manchester City got their Europa League campaign off to a winning start last night, with a routine win over an unadventurous Red Bull Salzburg side that, with the exception of a brief spell of dominance at the end of the first half, failed to assert themselves in the tie.

It was City’s £24 million summer signing David Silva that got the ball rolling early on, slotting Jo‘s lay-off past Gerhard Tremmel in the Salzburg goal with just eight minutes gone.

City then began to allow Salzburg gradually back into the game, and both Ibrahim Sekagya (a scuffed volley that ballooned over Joe Hart and clipped the bar) and Nikola Pokrivac (a well-worked freekick that was eventually driven wide) went close to equalising for the Austrians.

Roberto Mancini‘s side eventually added a second goal to their tally in the 63rd minute, when Jo was on hand to effectively mop up when Tremmel could only parry Carlos Tevez‘ vicious effort.

Despite decent showings from a couple of his fringe players, it was Silva that Mancini chose to single out for praise after final whistle – and the Italian coach believes that now the only way is up for his new signing;

“David is a fantastic player, and for him it is a different situation now. He is playing a different kind of football. But after one month, he is ready to go 100% for the team. He will be an important player for the future. He is a strong player who played for Valencia in the Champions League for many years.”