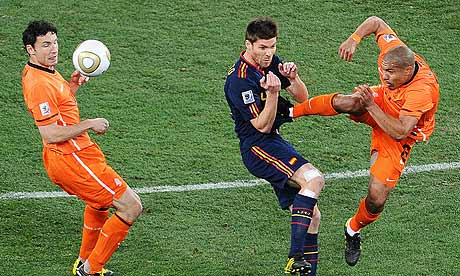 Saintly Dutch midfielder Mark Van Bommel is currently busy defending his compatriot Nigel De Jong, telling anyone that will listen that the Man City enforcer is really a ‘sweet guy’ – despite breaking two legs and kicking a Spaniard in the heart all within a six-month period.

De Jong has since been axed from the Netherlands squad by coach Bert Van Marwijk, but Van Bommel told AD Sportwereld that he is still very much a part of his father-in-law’s plans:

“Nigel is and remains one of us. We find this all very frustrating. It’s very unfortunate that he has broken the leg of an opponent twice in six months. But I know Nigel as a sweet guy.

He doesn’t want to injure anyone but wants to win every match. That is his strength. Thanks to Nigel we reached the final of the World Cup. And now I hear people calling him a criminal. What a nonsense.”

Van Bommel and De Jong were both widely condemned for dabbling in football’s dark arts at this summer’s World Cup, and the Bayern Munich man believes that he feels a certain degree of empathy with his midfield partner;

“I know exactly what Nigel is suffering. I have also had to answer for playing hard. But I didn’t want to injure anyone and I have had to think about that criticism.

Nigel should not change his game, we need him as he is. But maybe he should occasionally go into a tackle slightly differently.”

How about trying it at less than 100 mph?