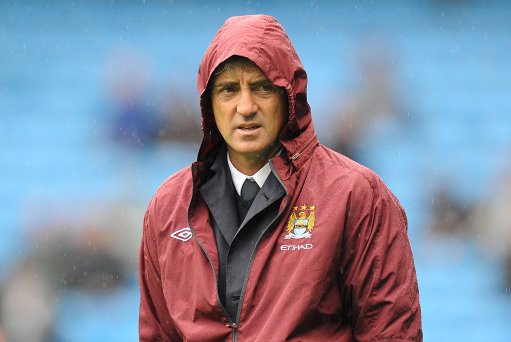 Manchester City manager Roberto Mancini has been on the defensive all week, quashing rumours of unrest within his squad hither and dismissing tales of his imminent resignation thither – even blaming the ‘nationalist English press’ for the current swarm of bad press that in enveloping Eastlands at the moment.

Mancini’s immediate future at the club was plunged into even greater doubt as City slid to their third successive defeat, losing 3-1 to Lech Poznan in the Europa League last night, although the Italian remains adamant that he will not resign from his post:

“For me it is totally clear, I will stay at City until they fire me. I’ve seen the owner Sheikh Mansour two or three times and we have a good relationship.

“I also have very frequent contact with the president, Khaldoon Al Mubarak. We speak three or four times a week and he often comes to training.”

Referring to the defeat in Poland, Mancini added:

“At the moment everything is against us, we are very unlucky. I’m disappointed because we didn’t deserve to lose this game.

“We played a good game and we had a lot of chances to win but we must continue to work.

“We lost the last three games but that is football, sometimes you play well, you deserve to score but you don’t.”

So a complete and utter lack of anything even half-way resembling a ‘plan B’ constitutes ‘deserving to score’ these days does it Roberto?