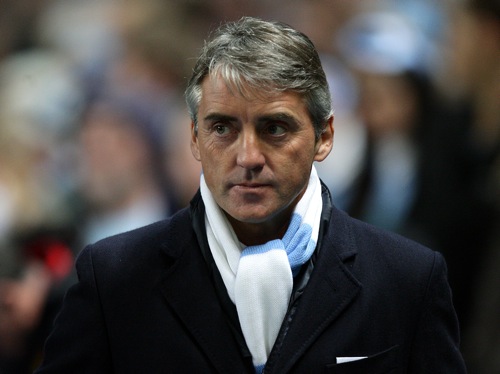 Action: Drawing 0-0 at home against struggling Birmingham City (hardly the most positive team in the Premier League), Man City boss Roberto Mancini decides to take off Carlos Tevez and replace him with… Gareth Barry.

Reaction: City fans break into a chant of “What the fuck is going on?”

I’m not a City fan, but even I find Mancini’s roundheaded tactics infuriating sometimes. But when it comes to not losing, you have to concede that Mancini gets results. Nil-nil results.

“…If you want us to entertain I could put on three strikers. Do you think that would help? Or do you think the side would lose balance?

“All supporters think like this, in England and Italy. But if they think that I should put on four strikers and we would score four goals … no, that’s not the way football is. If football was like that, I would put on 10 strikers.”

Of course he has a point – and God knows, football managers are infinitely more qualified to manage football teams than fans – and City did have 21 attempts on goal against Birmingham, but the Italian needs to loosen his tie a bit before he wins the full support of City fans.