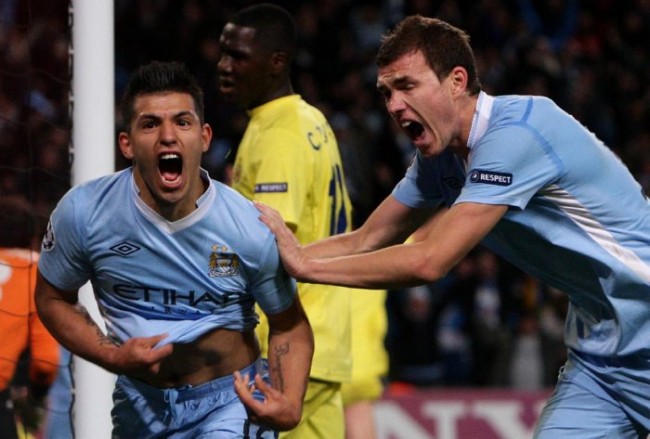 Bob Mancini was the first to admit that Man City were ‘lucky’ to register their first ever Champions League victory over Villarreal yesterday evening, with substitute Sergio Aguero’s 94th minute goal plundering a come-from-behind win over the Spaniards at the death – thus snaring a vital three-point haul that puts City back in the running to emerge from Group A, despite things looking a little bleak as the clock ticked over to ’93:00′ at the Etihad last night.

Villarreal went 1-0 inside the first five minutes, with Cani sweeping up from close range after Joe Hart had parried Giuseppe Rossi’s low drive straight into the oncoming midfielder’s path.

After replacing a clearly gutted Adam Johnson with Gareth Barry five minutes before the interval, City managed to fathom an first-half equaliser when Claudio Marchena unwittingly steered in Aleksandar Kolarov’s cross – a ball destined for Edin Dzeko though, judging by the Bosnian’s previous lacklustre efforts, the veteran Spanish centre-half definitely did him a gracious favour by applying the finish on his behalf.

Aguero then entered the fray on the hour mark, and promptly did what he’s paid so handsomely to do as the honours looked all but set to end even – nudging David Silva’s miscued flick over the line at the far post from a couple of yards out with the last kick of the game.