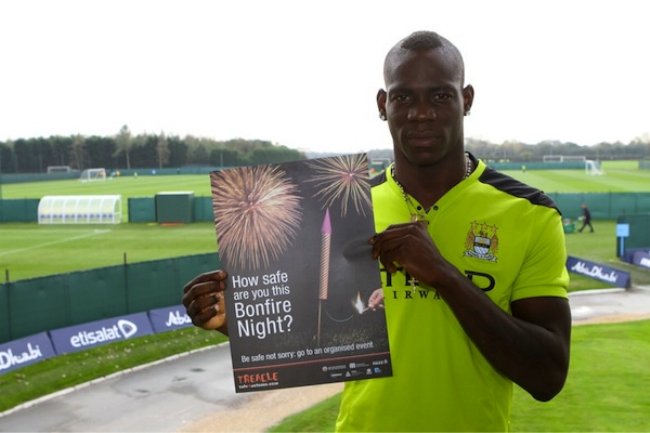 It’s so ironic, it simply must be fattening!

As we creep toward Bonfire Night and stupid children start dreaming about doing stupid things with over-the-counter explosives, Man City have started a club campaign called TREACLE to promote firework safety this November and who better to front that campaign than a man who nearly lost everything (on his towel rack) at the weekend in a fireworks-related house fire?

That’s right. City have signed up Mario Balotelli as their official Fireworks Safety Ambassador, and the man had this to say on his appointment:

“It is important children should not mess with fireworks. They can be very dangerous if they are not used in the right way. People should follow the firework code.

“The newspapers got the story wrong about me, I didn’t set any fireworks off, it was a friend of mine. I didn’t know anything about it until I heard shouting coming from the bathroom. My friend apologised to me for the damage to my house. It was a really stupid thing to do.

“Even when I have had bad moments [the City fans] have supported me, but I don’t care what people say about me. I am focused on my football, my manager, girlfriends and my family.”

Anyway, in all seriousness, getting Balotelli to front such a well-meaning campaign is an excellent move. He’s the living embodiment of a footballing cartoon character. Kids love him and hopefully they’ll do as he says and not, for the sake of us all, as he does.