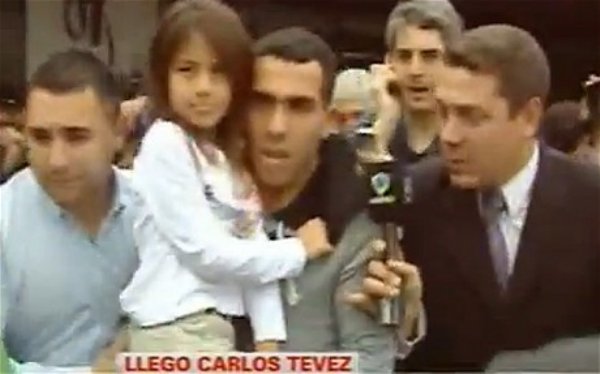 There’s only one thing that Carlos Tevez loves more than a spur-of-the-moment South American city break with the kids and that’s breaching his Man City contract, so you can imagine just how giddy he was after succesfully managing to combined this two twin passions yesterday.

Sprogs in tow, Tevez was filmed by local news crews touching down at Ezeiza Airport in Buenos Aires on Tuesday morning (the very day he declared that he wasn’t going to be contesting his reduced £396,000 fine for ‘failing to warm up’ in Munich), despite having his request to return home to Argentina officially declined by Roberto Mancini.

In fairness, yesterday was apparently a designated day off, but Tevez is part-way through a rigorous fitness regime at City and was/is expected to report to training at Carrington this morning though, what with his last known whereabouts being some 7,000 miles away, it’s not looking overly promising – and you know what another no-show means? Breach of mother-humpin’ contract!