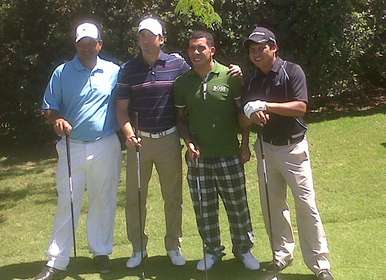 The whole Carlos Tevez saga is quickly turning into a farcical situation, with the AWOL player and his club, Manchester City, seemingly growing further and further apart by the day.

However, neither side really seems too bothered by the whole affair. While the Citizens have been dominating the Premier League, Tevez has been enjoying himself back in his homeland. Indeed, the former United man even entered a  golf tournament for both professionals and amateurs in Buenos Aires, which he won after partnering  golfers Sebastian Fernandez and Andres Romero.

When quizzed about the state of mind of his golf chum, Fernandez said: “He did not say anything about his problems with his club, but I was struck by the peace he had. He plays golf very well.”

At least if his football career permanently grinds to a halt after the drama with City, Tevez might be able to make a few shillings on the golf course.