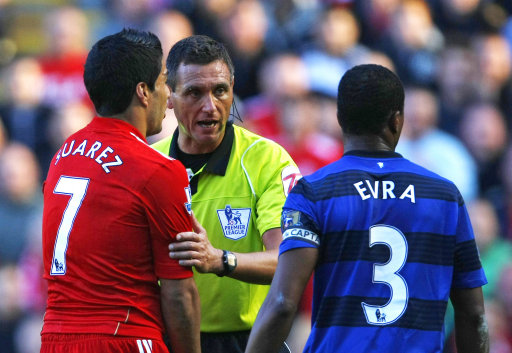 It’s a saga which has stoked the flames of well, hatred, between the red half of Liverpool and the red half of Manchester, but now, finally, The FA has passed judgement on Luis Suarez, with the Uruguayan receiving a very hefty eight-game ban for racially abusing Patrice Evra.

As well as missing those eight games, Suarez has also been dealt a £40,000 fine which sounds rather less harsh on the millionaire footballer. Still, the decision by The FA hit the Liverpool star hard won’t go down too well on Merseyside.

Indeed, Liverpool FC have already released the following statement which is rather damning of The FA’s decision.

“We find it extraordinary that Luis can be found guilty on the word of Patrice Evra alone. No-one else on the field of play – including Evra’s own Manchester United teammates and all the match officials – heard the alleged conversation between the two players in a crowded Kop goalmouth.

“It appears to us that the FA were determined to bring charges against Luis Suarez, even before interviewing him at the beginning of November.

“Nothing we have heard in the course of the hearing has changed our view that Luis Suarez is innocent of the charges brought against him and we will provide Luis with whatever support he now needs to clear his name.

“Evra admitted himself in his evidence to insulting Luis Suarez in Spanish in the most objectionable of terms. Luis, to his credit, actually told the FA he had not heard the insult.

The player himself also Tweeted: “Today is a very difficult and painful day for me and my family. Thanks for all the support.”

The ban and fine are suspended until the outcome of any appeal from Liverpool. This story isn’t over just yet.