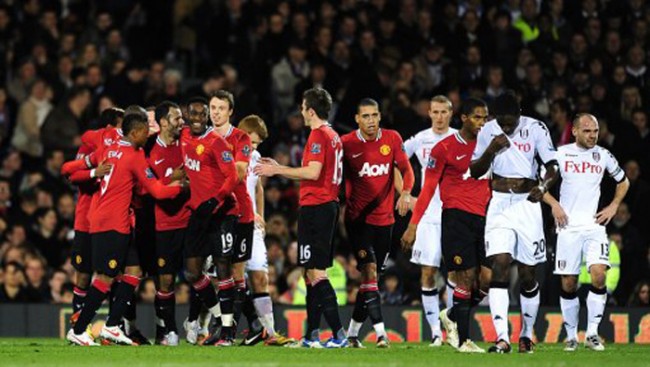 Manchester United kept up the pressure on their cross-city rivals with an impressive performance at Craven Cottage against an admittedly appalling Fulham side.

The home team simply couldn’t live with United’s slick attacking play and were already a goal down after just five minutes courtesy of Danny Welbeck. Portuguese livewire Nani made it two just before the half-hour mark while Welsh legend Ryan Giggs kept up his record of scoring in every Premier League season (that’s a frankly astounding 20 seasons on the spin now!) courtesy of a deflected effort just before half-time.

The Cottagers improved in the second-half but late goals from Wayne Rooney (from 30 yards) and Dimitar Berbatov (a superb backheel) completed a dismal night for the west Londonders who are now just four points clear of the drop-zone.

Despite the convincing win, Sir Alex Ferguson will be concerned after seeing both Phil Jones and Ashley Young go off injured as we approach the traditional busy Christmas period.