The following photo has just landed on Pies’ doormat in an unmarked Manila envelope, and professes to be the new Nike home kits for Arsenal (featuring the gruesome black collar and cuffs that Arsenalinsider alluded to a few days back), Barcelona (replete with Corel Draw 3-style colour gradient) and Manchester United (seven shades of ugly Gingham tablecloth)… 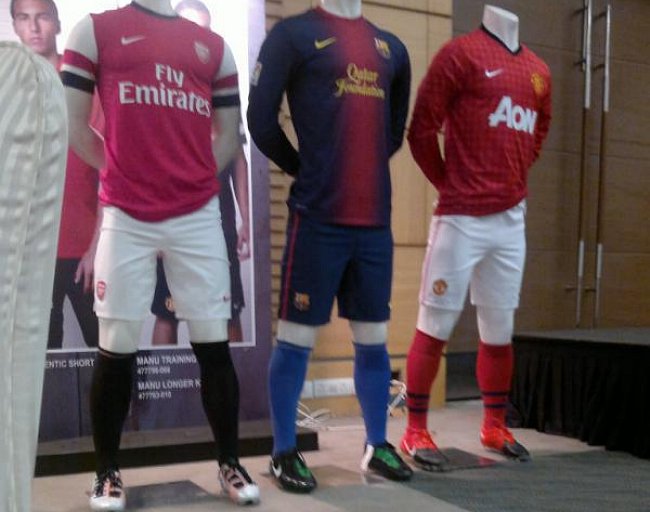 Nasty. One and all. This photo comes from a slightly dubious source and, as such, shouldn’t be taken as gospel – but let’s just give these ‘ere kits a quick once-over anyway shall we?

Firstly, black just doesn’t look right on an Arsenal kit. Period. We don’t know if there’s any specific significance for the black elements, but Nike seem to have somehow loused up a previously unlousable strip. Those socks. Bleurgh.

As for Barca; it’s not quite as bad as the mock-ups suggested it was going to be but the two different shades of blue are a tad unnecessary. Throw in some darker blue socks and maybe we’ll talk.

Man Utd: Burn it, burn it with very hot fire. Whoever thought this was a good idea should be pushed into a crevasse along with the exec that gave him/her the go-ahead.