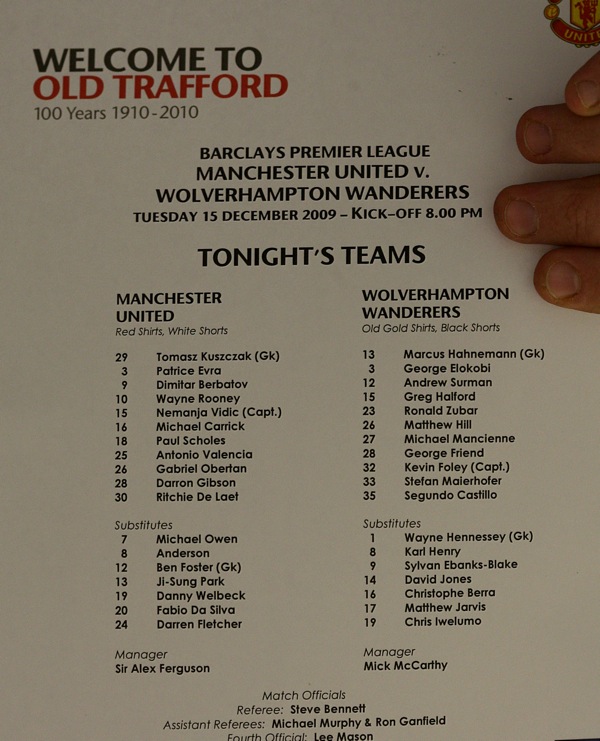 Mick McCarthy fielded a weakened XI at Old Trafford last night, resting some ten first-team players. Man Yoo played quite poorly but won easily. Therefore McCarthy has been found guilty – by the kneejerk media, at least  – of bringing the game into disrepute (there’s plenty of disrepute in journalism also, disrepute fans), of disrespecting the Premier League, of being Satan’s little helper, of being a BA cabin-crew member; you name it.

The Premier League has asked McCarthy to explain his selection. No doubt bluff Mick will reiterate what he has already said:

“I’m not bothered about angry reactions anywhere else, my priority is my own team and any decisions I make this season will be based on whether or not we can stay in the Premier League.

“I accept some of the fans may have been unhappy with the team I put out, but I would hope they will understand the situation. I played my strongest team and we competed with United.”

Whilst the reaction to McCarthy’s selection has been over the top, and it’s my natural incliation to side with the underdog, I think there’s no way to defend him on this one – he blatantly put out a weaker XI, presumably with this weekend’s winnable fixture against Burnley in mind. The irony is, had Wolves’ first XI played at Old Trafford last night, they might well have been good enough to sneak a point, or more – the Theatre of Dreams has hardly been a fortress this season, after all.

I’m sure in McCarthy’s mind, he’s thinking: “Screw you all, it’s my job to keep Wolves up, and it’s up to me how I do that.”

Fair enough, but as much as the big four might rest players in the League Cup, in the Prem it’s required that you field as strong a team as possible. Clearly, Wolves did not do that last night. But, as Paul Wilson rightly points out in the Guardian, in modern football, the concept of a first XI is outdated anyway. And who are we to judge the fitness levels and form of McCarthy’s players.

In ice hockey, for example, teams are rotated frequently, even during matches. Fans don’t care, as long as the players on the ice give their best. The same should go for football. It’s about managing resources, and for Wolves, it’s all about staying in the top flight. So I hope the authorities go easy on Mick.

Indeed, you might even make a case for blaming the Premier League’s fear-engendering effect on English football, which means that all but a handful of Prem teams are concerned solely with survival and the money it brings.

I feel slightly sorry for Wolves fans who travelled to OT full of belief after the win at Spurs, but at the end of the day (Brian), it’s about supporting whichever team is put out wearing your colours. And how many times have fans of smaller clubs been disappointed by under-strength teams fielded by the big boys in cup competitions?

McCarthy’s selection sent the message: this is what the Prem reduces managers to. And, as we all know, you don’t shoot the messenger.