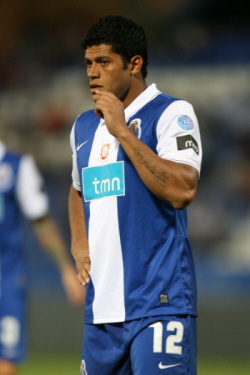 Reports today suggest that two of the Premier League big guns will move for 23-year-old Porto striker Hulk. The Brazilian forward has a rumoured release clause of nearly €100 million but a more realistic sum of £15-20 million would surely tempt Porto to sell.

From what I’ve seen of Hulk he would certainly fit the bill at The Emirates. He kind of reminds me of Julio Baptista but less … erm… crap.  He is a powerful and direct player but his tendency to shoot from outside the six-yard box may put Wenger off, along with the inflated price tag. None the less, with RVP out for the foreseeable future and only Bendtner and Vela waiting in the wings, a move for The Hulk would make sense for Arsenal.

Man Utd still have wodges of the C-Ron moolah left over and I don’t think an outlay of that size would put them off if they really wanted their man. I think he’d be a better foil for Rooney than Berbatov who is, for all intents and purposes, immobile.

What do the Pies faithful reckon? Would you like to see The Hulk-a-nator in the Prem?