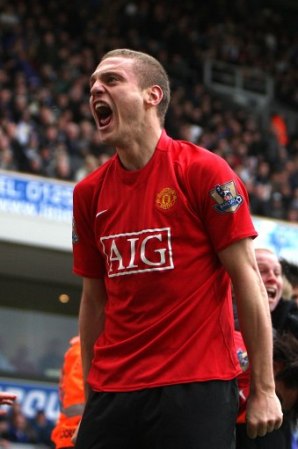 Vidic has been a roaring success at Man Utd

In the wake of the stories linking Nemanja Vidic with a move to Real Madrid, Manchester United have apparently targeted a hat-trick of centre backs to replace the seemingly outbound Serbian. Juventus’s Giorgio Chiellini, Palermo’s Simon Kjaer and Bolton’s Gary Cahill are all reported to be on the Old Trafford club’s wish list.

Of the three players I know which one I’d prefer as only Chiellini’s name stands out as world-class on that list to me, although with Rio Ferdinandcurrently merc’d… sorry… injured and looking decidedly out of sorts, maybe a move for two of the three would be a better option for Sir Alex.

From what I’ve seen of Chiellini he appears to be the real deal, a no-nonsense yet composed defender. A bid in the region of £12 million could seal the 25 year old Italy international’s signature and at that age you feel the best may be yet to come.

Danish defender Simon Kjaer, 20, has found his name consistently linked with big-money moves to teams across Europe (most notably to Manchester City) after some fine performances for Palermo this season but has repeatedly stated that his is happy at the Rosanero, at least until the summer. His transfer fee is touted to be in excess of the £20 million mark which suggests that it would be a money-no-object outfit like City that would gamble on the Dane rather than the more fiscally cautious teams linked with him.

Gary Cahill has proven to be an effective Premier League-standard defender and has contributed six goals to Bolton’s cause already this season, a statistic that is surely a factor in The Trotters’ inflated £15 million asking price. Whilst I do believe that Cahill is a good prospect, I can’t help but feel that the goals he has scored this season have masked some of his defensive inadequacies – after all he must surely take part of the blame for Bolton’s lack of clean sheets this season. A £15 million outlay may be too much of a risk on a developing player that is unproven at the highest level of football.

So, if Vidic does leave, who do you think would be the ideal replacement at the back for Man Utd?