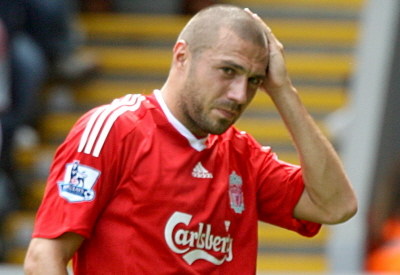 I really am so truly, truly sorry

You can almost hear the collective sigh of relief emanating from Merseyside as the news filters through that Andrea Dossena will finally sign for Napoli in a £4.5 million, four and a half year deal after the final details are hammered out later today.

The Italian full-back signed for Liverpool from Udinese for £7 million nearly 18 months ago and has, to put it politely, not had the best time of it. He may yet prove to go down in club folklore though, for scoring the final goals in Liverpool’s famous maulings of Real Madrid and Manchester United last year.

It is more likely, however, that Dossena will be remember by most fans as a player who just wasn’t suited (read: good enough) to play in a Premier League team that had aspirations of competing for the title, and a shining example of why Rafa Benitez shouldn’t be trusted with a transfer budget of any note. He seemed out of sorts physically and never truly comfortable with the pace of the English game. As a result he had his role reduced to that of a bit-part player with only five appearances in all competitions this season.

I’m amazed that Liverpool have been able to recoup as much as they have through the resale of Dossena but the fact that a host of Serie A clubs have been linked with the 28 year old during his torrid stint in England shows that his stock hasn’t dropped that significantly in his homeland. Dossena is accustomed to the slower nature of the game in Italy and it wouldn’t surprise me if he recovers his form and starts building a decent reputation for himself again.

Do the Liverpool fans out there think you’ve got yourselves a good deal here (in managing to get £4.5 million for a resounding flop)? Or is the net loss too much to bear considering the minimal impact Dossena made at the club?