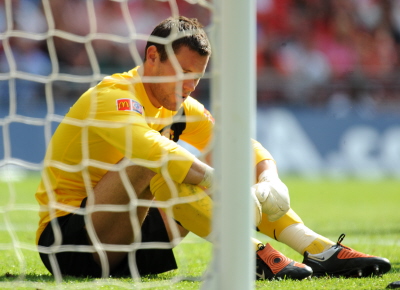 The pose that has come to be known as ‘The Foster’

Manchester United have drawn up a stellar list of goalkeepers as possible replacements for Edwin Van Der Sar and busted flush Ben Foster.

After recent stories surfaced that United manager Sir Alex Ferguson is ready to instigate a huge personnel change at Old Trafford, it is perhaps unsurprising that Fergie is looking to replace the ageing Van der Sar and the inconsistent Foster (the latter having lost his place on the bench recently to 20 year old Ben Amos) whilst keeping Tomasz Kuszczak on at the club as an able deputy.

Ben Foster would be available for around £4 million, which would represent fairly good value for a keeper who is undoubtedly talented, young by goalkeeping standards and surely has a point to prove after some much-criticised displays between the United sticks. His morale seems to be very low and he would surely benefit from a prolonged stint of first-team football, as Joe Hart has at Birmingham City – but I can’t see him getting that at Man Utd any time soon.

Maybe a move away would be the best bet for the former Watford stopper, as with the World Cup in South Africa coming over the horizon quickly, Foster needs to find form fast to secure his plane ticket – whether that be at Old Trafford or not.