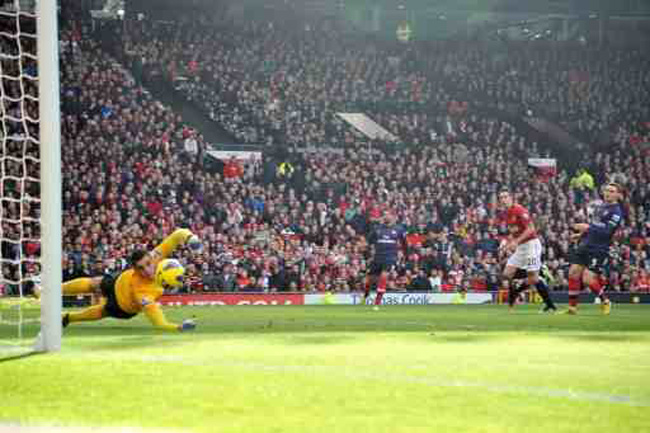 By my maths, Arsenal’s 2-1 defeat to United in the early game on Saturday means that this current Gunners side is four times better than last season’s, which lost 8-2 in the same fixture. Fair?

Shorn of star player Robin Van Persie, the north Londoners are now a club who seem to judge success by balance sheets and boardrooms, rather than results on the field of play. And not surprisingly, the Dutch superstar was key to the Red Devils’ result, firing home after just three minutes, as the home side totally dominated proceedings.

Indeed, United barely raised a sweat against an extremely poor Arsenal, with Thomas Vermaelen having yet another poor game and Andre Santos making a mockery of Arsene Wenger’s selection. Indeed, at half-time the Brazilian clown apparently asked RVP for his jersey, which says it all you need to know about the defender.

The home side could have matched last season’s 8-2 result, only for a number of good saves from Vito Mannone. Santi Cazorla did get one back for the Gunners at the death, but it was hardly deserved, as the Gunners failed to direct a shot on target until injury time. Oh, and the icing on the cake of despair for the visitors was the red card Jack Wilshere picked up for two bookables.

The Manchester giants go back to the top of the table, while the Gunners, with just 15 points from their first 10 games, have now made their worst-ever Premier League start under Arsene Wenger. At least they’ll dominate once Financial Fair Play kicks in (cough).