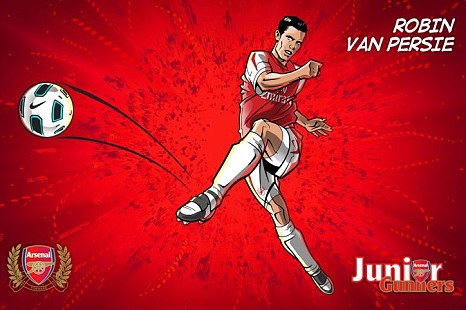 With many fans still nursing the wound inflicted when Robin van Persie left for Old Trafford, Arsenal have gone and tipped a cellar-full of coarse sea salt in and ground it into the open sore with wire wool by sending out fan packs to members of their ‘Junior Gunners’ young supporters club with the Dutchman’s image emblazoned across the cover!

To make matters worse, the cover also features Alex Song who, it probably didn’t escape your attention, also left for B*******a over the summer too…

Around 20,000 of the packs were sent out to young Arsenal fans at £20 a pop (membership included), with most recipients left bemused by the images that greeted them on unwrapping the parcel.

Disgruntled Gooner Elliott Gerner, who shelled out 20 clamolas for a membership for his eight-year-old son Noah, was up in arms about the whole ordeal, telling the Daily Star:

“It is an absolute disgrace. They are the two most prominent players and neither of them play for us any more.

“This is a season where they have put up the price of season tickets and sold our best players, but they can’t afford to reprint this.

“My son was supposed to be excited about his and instead he’s asking why Van Persie is on the front.”

That’s a question no father should have to answer.

We presume they’re still using RVP because their isn’t a crayon in the world capable of accurately capturing just how ineffably terrible Marouane Chamakh’s hair is.