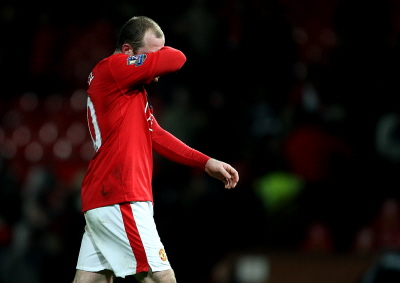 In a story that has presumably just been picked from the footballing ether, The Daily Star are today reporting that Barcelona have stepped up their bid to take Wayne Rooney to the Camp Nou.

Rooney, who has decided to delay any re-negotiations until after the World Cup, still has two years left to run on his current United contract and has stated numerous times that he wishes to end his career at the club by tying up a five year extension that would keep him at Old Trafford until 2017.

The only sticking point is that Manchester United are unwilling to match the England striker’s £140,000-a-week wage demands and Barca hope to capitalise by offering a staggering £8 million (after tax) annual salary to lure Rooney to Spain, as Pep Guardiola has apparently identified the 24 year old as the Catalan club’s top summer transfer target.

There have been a few stories in the national press recently regarding Rooney leaving for Spain or Italy and I think they can all be written off as ‘filler’. I can see United being perfectly willing to break their pay structure to keep their most influential player at the club.

What do we reckon Pies faithful? Can you see Manchester United being willing to lose Rooney for the sake of wages that – in reality – fall some way short of what Messi, Ronaldo, Kaka, Ibrahimovic et al take home already?