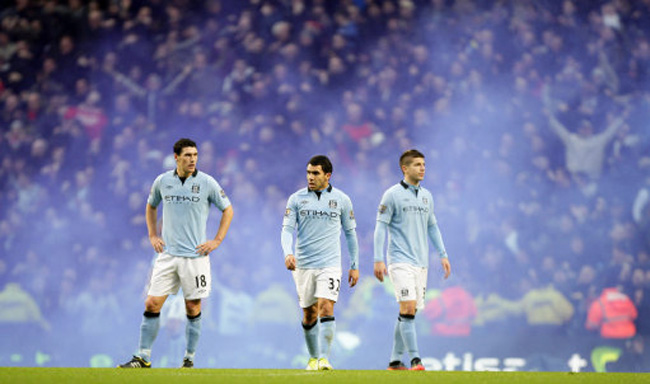 Man City’s unbeaten home record came to an end on Sunday, courtesy of a 3-2 defeat at the hands of their Mancunian neighbours.

United started the game superbly and were 2-0 up within the first half-hour, with Wayne Rooney netting both goals as City’s defence crumbled (with his second his 150th in the Premier League).

However, after the break, the home side rallied and the introduction of Carlos Tevez for the rather poor Mario Balotelli gave the Citizens a new impetus. Yaya Touré, on 60 minutes, fired home from inside the box to get his side back into the game and as they pushed and pushed for an equaliser, they were eventually rewarded courtesy of Pablo Zabaleta’s well-struck effort on 86 minutes.

City looked like they’d at least keep their unbeaten home record but then, at the death, RVP fired home a deflected free-kick to send the red half of Manchester wild. A couple of nasty incidents involving Rio Ferdinand being hit by a coin and a City fan squaring up to some United players on the pitch ensued. But ultimately, Fergie and co. were very satisfied winners/.

The Red Devls go six points clear of City at the top of the table after a quite fantastic derby clash.