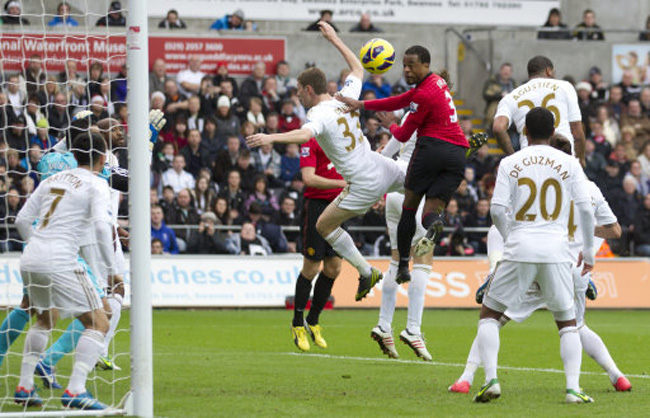 The £2million purchasing of Michu by Michael Laudrup must go down as one of the canniest signings of this season at least, with the attacking midfielder flourishing in a striking role for the Swans.

The Spaniard’s goal on the half-hour mark cancelled out Patrice Evra’s headed opener and ultimately gave the home side a share of the spoils against the league leaders.

Throughout the game, United had the majority of possession and fashioned enough chances to win the game easily. However, on more than one occasion the woodwork came to the rescue of the Swans, with Robin Van Persie and Michael Carrick both denied by the woodwork.

As the game entered its final stages, the Red Devils pushed for the winner, but both sides became embroiled in a right old  hoo-ha after Ashley Williams lashed the ball into the back of Van Persie’s head. Both players were booked in the ensuing meleé but ultimately United just couldn’t get that winner.

Fergie’s men now find themselves four points clear of Man City at the top of the table while Michael Laudrup’s Swansea go 11th.