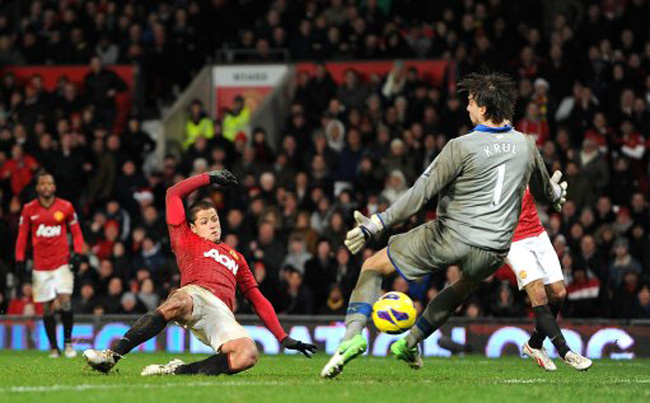 United are well known for their never-say-die attitude and ability to fight back to win vital points when the odds have been stacked against them. But this season the Red Devils have taken this penchant for comebacks to a whole new level, with their 4-3 Boxing Day win over Newcastle a perfect example.

Despite going behind on three occasions against the Magpies, United still battled back to ultimately secure a precious three points at Old Trafford.

James Perch had taken the lead for the visitors after just four minutes, courtesy of some dodgy ‘keeping from David De Gea before Jonny Evans levelled things up. However, the Irishman then put through his own net, a controversial goal as Papiss Cissé, despite not touching the ball, was in an offside position and pressuring Evans.

At half-time, Fergie gave the officials a right tongue-lashing over the decision to allow the own-goal and the wily old Scot’s protest seemed to re-energise both the Old Trafford fans the the Untied players.

With a spring in their stop, United then levelled things up on the hour-mark, courtesy of Patrice Evra, again getting amongst the goals,  before Cissé scored a cracker. However, Robin Van Persie and then Javier Hernandez at the death, secured a vital win that puts the Red Devils seven points clear at the top.

Despite the dramatic win, Fergie is sure to be concerned by his side’s appalling defending. However, with a whole load of firepower at their disposal, United are making up for their dodgy backline with a regular and plentiful supply of goals.