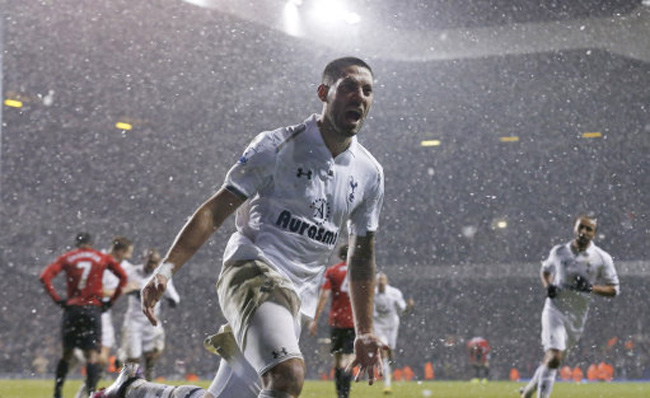 A last-gasp strike from Clint Dempsey secured a very handy point for Spurs against Man Utd on Sunday afternoon.

In a game played in snowy north London, it was ex-Gunner Robin Van Persie who (once again) opened the scoring on 22 minutes, with a fine header which beat Hugo Lloris in the Tottenham goal. And for the rest of the first-half, the visitors looked assured although they did have David De Gea to thank on more than one occasion.

After the break, the Lilywhites pushed for an equaliser while Sir Alex Ferguson sent on Wayne Rooney to bolster his side’s attack. The striker had an instant impact on the game, getting fouled in the box by Steven Caulker only for referee Chris Foy to wave away the United penalty claims.

Then, with the game into its 93rd minute, Dempsey popped up to secure an arguably deserved point for the home side after De Gea, a hero for most of the game, failed to get enough distance on a punch.

United are now five points clear of Man City at the top of the table while Spurs go fourth, four points behind Chelsea.