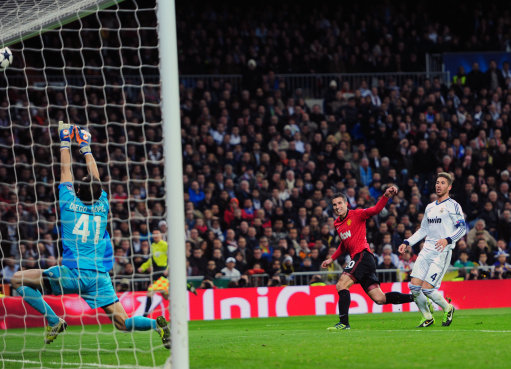 1. Manchester United would’ve taken that result before kick-off. While they’re not necessarily in pole position for the Old Trafford leg, with an away goal under their collective belt United are in a much stronger position to squeak through than many – including yours truly – predicted.

2. Speaking of the second leg, it really is wide open and theoretically should be an absolute corker. Roll on 5th March!

3. David de Gea is a truly top-notch ‘keeper, positively brimming with potential, who has had far too much criticism slung his way since moving to England by slack-jawed pundits. His three or four saves last night proved his long term worth…

4. Phil Jones did a pretty decent job of restricting Cristiano Ronaldo, tucking just inside his man all night to stop the Real Madrid forward from cutting inside. You can never guarantee that trying to limit Ronaldo to pot shots from distance will stop him from scoring, but Jones did his job man-marking job… well, “manfully” and by and large kept Ronaldo at bay during open play.

5. Nobody can leap like Cristiano Ronaldo. Excuse the Americanism, but the hang time he got for his goal was just stupid… 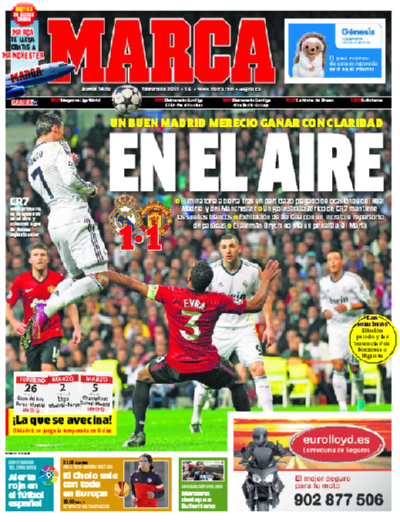 6. Real pretty much dominated (60% possession), though that doesn’t mean United played poorly. Despite a fairly attacking starting line-up and an open first half, United employed ‘Helms Deep’ tactics as the match wore on (as seems to be typical of English sides away in Europe) but withstood the pressure amicably.

7. Rooney was out of sorts on the right, where he was deployed to keep an eye on Fabio Coentrao’s bombardiering overlaps. He never quite looked comfortable with his role and made a few tell-tale defensive errors over the course of the night. It’s exactly the kind of thing James Milner usually does for England, but Rooney is far too much of an attacking threat to waste him like that.

8. Nice of these United fans to promote the use of Class A drugs. You hear so much anti-drug sloganeering these days that it was nice to hear the other side of the story for once… 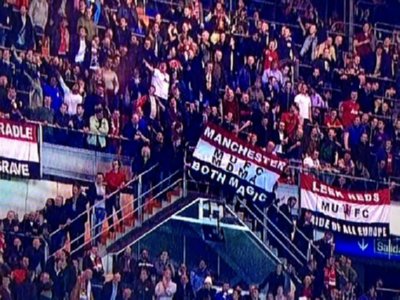 9. Robin van Persie took a lot of flak from the pub crowd for failing to connect properly with his late chance, but a truer connection probably wouldn’t have beaten Diego Lopez, who got out very quickly. Sometimes a fluky scuff is more effective, as RVP came painfully close to proving.

10. Last of all, what a bloody brilliant game. A great night of top tier European football in one of the game’s most awe-inspiring theatres. Encapsulated the very essence of the Champions League.