1. First up, this never was and never will be a red card offence…

Terrible terrible call. Taken out of context and seen in isolation like this ^ it looks nasty, but it was blatantly obvious that Nani was rising to pull the ball out of the sky and Arbeloa’s flank just so happened to get caught in his path. It was all an absolute nonsense: the delay, the decision, the drama. The crap that Roy Keane was spouting about Nani being “aware” of Arbeloa had me seething where I sat.

2. Wayne Rooney’s omission from the starting line-up was just a judgement call which was more than justified by Danny Welbeck’s performance on the night. It wasn’t “payback” for the contract wrangling from THREE YEARS AGO (don’t you think Fergie would’ve pulled him from the Champions League Final in 2011 or something if he was going to rob him of a big game as punishment?) and it’s not the “end of the road for Rooney at United” so f**k off the lot of you shit-stirring tabloid vultures.

3. The Tyldesley/Townsend axis needs to be broken up post haste. ITV football is teetering on the verge of becoming utterly unwatchable.

4. Nemanja Vidic wins the world in the air.

5. Jose Mourinho’s assertion that “the best team lost” on the night coupled with his lack of celebration on the touchline and him prematurely slinking down the tunnel, heck, it almost seemed like he was deliberately trying not to do his future career prospects any harm *nudge nudge wink wink*.

6. Luka Modric is far too good to be sitting on anybody’s bench, even Real Madrid’s. Even without throwing his superb goal into the mix, Luka gave Madrid’s central midfield so much more purpose when he came on – though a certain refereeing decision did make it a lot easier for him to wade in so effectively.

7. Real Madrid ‘keeper Diego Lopez was the Man of the Match by a country mile. We took immense joy in Andy Townsend (we promise we’re not obsessed) writing him off as a shaky second-string ‘keeper only for the former Villarreal man to produce a string of four or five top notch saves immediately thereafter! 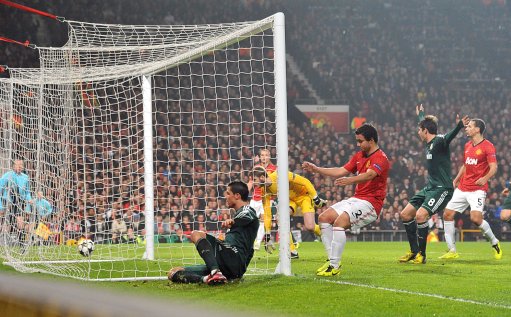 8. It may be nothing more than a “far post tap-in” in every single match report this morning, Cristiano Ronaldo’s finish was a lot tougher than it looked and it wasn’t quite the sitter it first appeared to be. Tricky little bugger to get right, that – take it from a man who’s missed his fair share of far post tap-ins!

9. After Ronaldo scored we stumbled upon a moral quandary: If one is to purposefully not celebrate a goal out of “respect” for a former team (which we find a bit lame anyway), then surely one must also hold his hands up in apology after a defense-splitting pass or tearing past a defender and delivering a pinpoint cross, etc? Basically, Ronaldo should’ve played all night with his hands apologetically wafting around in the air.

10. Again, on Ronaldo: The prodigal son didn’t “go missing” or “have a quiet one” on his big return (Adrian Chiles, I’m looking at you). He was man-marked almost four-fold for the majority of the game and still managed to score the winning goal.

11. Shame he was so “distraught” as we’d have loved to have seen Fergie’s post-match interview after that one!

Agree/Disagree? Let us know all about it…