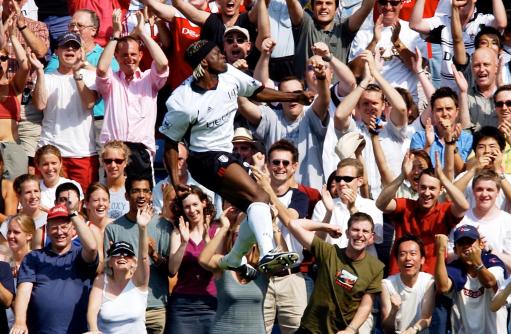 A fine striker in his pomp, former French international and Premier League regular Louis Saha has decided to retire from professional football, doing so on his 35th birthday.

After starting his career with Metz, the Paris-born Saha enjoyed a brief loan spell with Newcastle before moving to Fulham in 2000, where he blossomed with his goals helping to fire the Cottagers back into the top tier of English football.

After making over 100 appearances for the west Londoners, Saha moved to Man Utd but the striker’s time at Old Trafford was hampered by injury, although he did still manage a decent 28 goals in 86 league appearances (as well as winning two Premier League titles, one Champions League winner’s medal and one League Cup title). A fine spell with Everton followed (27 goals in 97 league games) before Saha moved to Spurs, then Sunderland and finally Lazio. He also managed four goals in 20 games for Les Bleus.

Au revoir Louis, and thanks for the memories, some of which you can watch below. By the way, the clip shows all of his Man Utd goals in all competitions. I only chose his United goals as the video was the best IMO!