Liverpool have issued an apology after a Tweet sent from the club’s official Twitter account appeared t0 indulge in a choice bit of #Munichbantz earlier this morning.

After asking their followers to submit a three-song playlist they would like to hear played at Anfield before Sunday’s Premier League game against Manchester United, a fan responded thus… 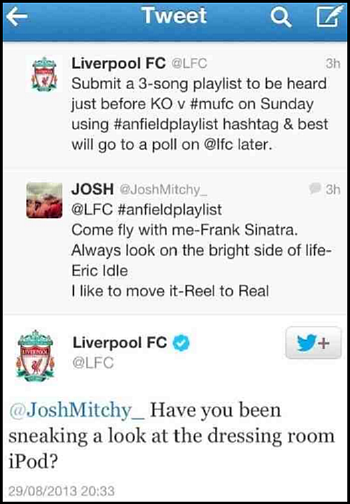 “Come Fly With Me” obviously being a hilarious reference to the plane gestures a minority of dozy ‘Pool fans use to bait their United counterparts, with the other two songs used as the basis for Munich-goading chants, ““Always look on the runway for ice” and “I like to Munich, Munich”.

It really is all top notch stuff, isn’t it? So witty.

After a raft of complaints poured in about the response from @LFC (who, lest we forget, are directly responsible for representing the club on Twitter) and the reply was swiftly deleted with Liverpool Football Club then releasing the following statement via their club website:

“Liverpool Football Club responded quickly to correct the error of judgment that was made last night on it’s official Twitter account in responding to a distasteful and inappropriate tweet.

“The club took decisive action and the comment was deleted swiftly. We apologise, unreservedly, for any offence that was caused by this mistake.”

United then used their official Twitter feed to say that they “welcomed the apology”.