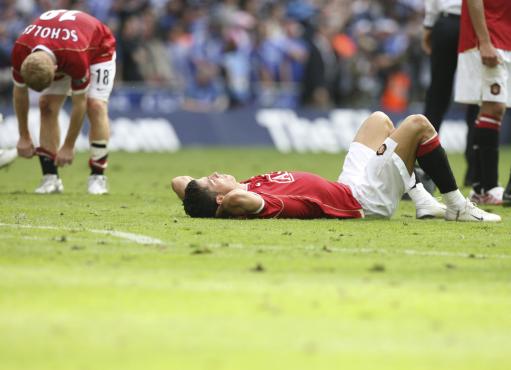 In what might just be the least unsurprising football revelation ever revelated, Phil Neville has lifted the lid on Manchester United’s training sessions of yesteryear, in which he, Roy Keane, Nicky Butt and Paul Scholes took it upon themselves to hack Cristiano Ronaldo’s diving tendencies out of him in a bid to curb his outrageous play-acting.

Speaking to ITV reporter Gabriel Clarke as part of an imminent Ronaldo documentary (we believe it airs tonight at 10pm on ITV4 if you’re interested?), Chopper Nev said:

“[Ronaldo] dived a lot. He tried to buy fouls and he came in for a lot of criticism. The boys [at Man Utd] were hard on him for his diving and it was putting us under pressure.

“I’d say the first 12 months there was a massive toughening up process. In training at the time you had Keane, Butt, Scholes, and every time he got the ball they kicked him and they kicked him – not just once, they kicked him every day, every week, all season.”

In very much the same way that my old Sunday League centre-back partner used to deliberately leave his studs in on any player who was up himself enough to turn up in gloves and/or long sleeves (even on bitterest winters mornings) and/or boots of any colour other than black.

What a gloriously English way of dealing with the problem.