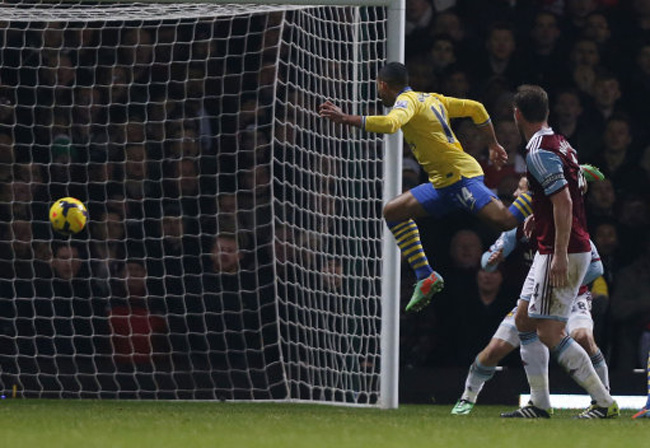 Here’s hoping you all had an at least above-average Christmas Day this year. Rather than do individual reports for each Premier League game on Boxing Day, I’ve decided on a smorgasbord of the best photos of the day, mainly due to laziness!

So, what a day Boxing Day was! Arsenal came from a goal down to beat West Ham, thanks in no small part to the returning Lukas Podolski. That win put the Gunners top as Liverpool went down 2-1 at the Etihad, despite pushing the Citizens all the way. Chelsea kept the pressure on the leaders with a 1-0 win against Swansea while Southampton crushed poor old Malky Mackay and Cardiff 3-0 in Wales.

In the early game, Man Utd came from two goals down to beat Hull 3-2, although the Tigers had chances to get at least a draw. Everton suffered a shock defeat at the hands of Sunderland at Goodison, with Tim Howard seeing red while Tim Sherwood’s Spurs could only draw at home to West Brom. Another side chasing Europe, Newcastle, battered Stoke 5-1, with the Potters seeing two men sent off.

At the other end of the table, all three bottom sides registered superb away wins, with Crystal Palace beating Villa and Fulham winning at Norwich, along with Sunderland’s superb Goodison Park win. Those results saw West Ham drop into the bottom three after their defeat to the Gunners. What drama!

Enjoy the pics and happy Christmas!