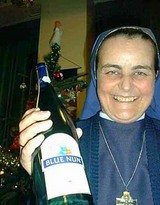 With the Premiership title race wide open after Saturday’s results, the Mind Games Tavern is open for business once again. The Sun reports today that Alex Ferguson is pondering which fine wine to share with Jose Mourinho after Chelsea meet Man Utd in the league at Stamford Bridge:
‘The last time Chelsea came to Old Trafford, Mourinho brought a superb bottle so Iâ€™ll have to reciprocate with something pretty special,’ said United’s red-nosed boss. ‘I wouldnâ€™t want him to be able to say that he gave me a better wine. Iâ€™ll have to think about a Chateau Latour or Margaux.’
Brilliant. Fergie is so damn competitive that he even wants to outdo Jose in the post-match hospitality stakes. Don’t go crazy though Alex â€“ for Chelsea, surely a bottle of Blue Nun would be perfect?
[More Man U] [More Chelsea]