‘This was the saddest night of my careerâ€¦’
Francesco Totti, on the verge of tears after Roma crashed out.
‘It was a fantastic performance by every one of our players. The speed of our play and our penetration was absolutely superbâ€¦ That’s absolutely the best night of European football we’ve had here.’
Alex Ferguson, a man who appreciates superb penetration.
‘He [Totti] was out of condition, and could not give a contribution from a physical point of view. That’s why I picked Vucinic from the start, to keep the ball up, otherwise we would have been crushedâ€¦ But considering how things turned out, I was wrong. If I could go back in time I would just stay home.’
Roma coach Luciano Spalletti takes a pop at his star player.
More reaction after the linkâ€¦ 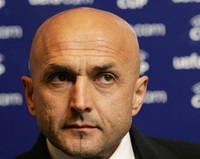 ‘English teams have good players, they go and get them everywhere, also thanks to their economical possibilities. They are more physical, complete teams.’
Spalletti (pictured) again.
‘Every player is very confident. They have a lot of belief in themselvesâ€¦ We lost in Rome but everyone still believed we would get throughâ€¦ It is an unbelievable result. To win 7-1 against Roma in a quarter-final is just great.’
Cristiano Ronaldo, Mr Self Belief.
‘They were better than us in all parts of the pitch. Overall in the two legs they were surely better than us. Tonight we’re very sad: up till now we had done good things; I’m very disappointed and saddened for our fans.’
Defeat is a bitter pill to swallow for Daniele De Rossi.
‘It was an incredible night, a really special occasion. There was a big build-up to the game and for it to go like that it was unbelievable. It’s a night that I won’t forget for a long whileâ€¦ The first goal was obviously crucial, it gave us a great chance of winning the tie. But to get sevenâ€¦ well, you can’t believe that.’
No, Michael Carrick, I can’t believe that.