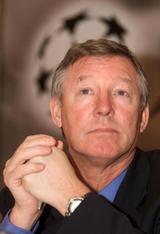 ‘The fact that three English teams should be in the semi-finals probably makes our league the best in Europe.’ So says Alex Ferguson and who are we to argue with him? He continues: ‘Six or seven years ago Spanish football was the best. But on the evidence of this season Barcelona and Real Madrid are not as near to where they were in previous yearsâ€¦ The competitive nature and the quality of the English game has improved over the seasons.’
I often disagree with what comes out of Fergie’s gob, but in this case I agree 100% with him. Spain’s Primera Liga is not strong right now and Serie A is weaker than ever. On current form the three strongest teams in Europe are Man Utd, Chelsea and Liverpool, the trio that occupy the top three places in the Prem table; and also the trio that will contest the Champions League semis, along with Bayern Munich or Milan. Yep (smugness alertâ€¦), we’re just great.
Feel free to disagree – you’d be wrong thoughâ€¦